Theatre Experiences in the Church

Our Artist-in-Residence has just begun a series of workshops on creating dramatic experiences from the stories of the Bible.  We began with some initial creative writing, and then turned our attention to a story from the book of Acts, imagining how we might expand the simple story into a dramatic encounter for people.  As a part of that imagining, each person chose a role that they might play in such a production, from the director and producer, to the publicist and media person.  It was a way of beginning to see the tasks that are a part of a production, and how all of those roles are essential.

Next week our resident artist will begin a monthly gathering to view and discuss classic films, looking at their history, at interesting facts, and discussing the ways in which such classics still have the power to touch our lives.

These are two new ways in which we are opening the doors of the church and inviting people in.  And, while we certainly would be happy to also welcome the people into worship, these programs will be successes in and of themselves if they do nothing more than help people to feel the welcome of the church through its arts programs.

As the church continues to stretch its ministry through the exploration of varied art forms, I believe that people will be touched through those programs with the grace of God.

As I visited the mortuary building that I wrote about last week, I encountered a photography exhibition entitled, “Woodlawn Cemetery: Dreaming of Winter.”  The exhibition was a collaboration between the cemetery and a photography class taught at nearby Santa Monica College.  The photographs were all taken on the grounds of the cemetery, capturing statues, light filtering through trees, and a beautiful variety of other subjects.  On the informative poster that was mounted at each end of the exhibition it said, “We do hope that you will enjoy our interpretations on a ‘wintertime feeling’ in sunny SoCal.”

The photographs themselves were mounted using white mats, with the bevel cuts opening to the image in the front, and a solid mat as backing.  There were also spacers of some kind between the two mats that allowed for a sense of depth.  It seemed to be a fairly simple way of displaying the photographs, but also very effective.

These mounted photographs were not set aside in some type of temporary gallery though.  Instead, they were mounted along the one wall of the entrance hall, leaving gaps where doorways intervened.  Even though it is a temporary exhibition, it gave a sense of permanence in how it was presented, attached to the wall of this building that is meant to last forever as the final resting place for so many people.

The names of the students were also listed on the informative posters.  Although I didn’t know any of them, it gave a very personal touch to the gifts of art that were on display.  I thought that the entire presentation was indeed well done.

The idea that another such class might accept an invitation to bring their creativity to the church and create a similar type of exhibition in the church is exciting to me.  It is also equally possible that a number of church members might be persuaded to themselves engage in such a creative endeavor, presenting their own unique views of their church through an exhibition of such photographs.

It is amazing to discover opportunities for creativity in unexpected places.

Art in Mortuaries and Cemeteries

After I officiated at a graveside service this week, I walked around in the mortuary building that doubles as a place where people are laid to rest and a setting where services are also conducted.  Striking among the many textures of the space, are the stained glass windows that grace the end of each of the corridors in the building, a variety of sculptures, and painted artwork as well.  Much of the stained glass art is pastoral in nature, from a beautiful waterfall to a pond with lilies.  There is also a striking window featuring a colorful sunburst, a symbol that can certainly be infused with spiritual and religious meaning.

As I walked the hallways, I thought also of the magnificent art that is so much a part of the Forest Lawn Mortuary and Cemetery in Glendale, California.  The creator of the Memorial Park was dedicated to bringing art onto the grounds of the cemetery and into the many chapels and other buildings that serve the needs of all who come to Forest Lawn.

The art in these spaces is available to people, mourners and visitors, as a guide into personal reflections, hopefully as a source of comfort for those who are grieving, and as a source of inspiration in whatever way each person stands in need of it.

Art in the church provides a similar source for reflection.  Worshippers who take a little time to sit and reflect before the worship celebration begins on a Sunday morning are afforded not only the Bibles and hymnals in the pews as a help in their meditations, but are also offered the visual gifts that the church provides through its art.  And that same art can easily be brought into the active worship of the people, in ways that move it from perhaps being in the background for people, to its being a vital part of their weekly worship.

Art serves the church in many ways, and its gifts are often beyond even what we imagine them to be.

A number of years ago a member of the church, Marilyn Neal, a watercolor artist, donated a painting of the three magi bearing gifts.  It is large, colorful and striking.  Through the brilliant colors that Marilyn employed, one can see the splendor of these visitors from the East.  Their gifts of gold, frankincense and myrrh are held out in offering to the family.  There is also, in the positions of their heads, in the lowering of their eyes, a distinct sense of humbleness and humility.  It is pictured here. 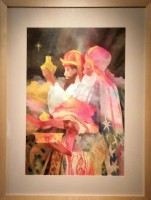 This painting gives us a sense of the majesty of the meeting between the magi and the family.  It provides us with a close-up look into the eyes of these visitors who have traveled many miles in order to see and worship a king who is come to earth from the heavenly kingdom.

By way of contrast, there is this beautiful painting that Alexi Pyles, a member of the church, created during the worship gathering just three Sundays ago.

This painting is also colorful, but with the dark foreground actually helping direct your gaze to the brilliance of the sun and the beauty of the sky.  Whereas in Marilyn’s painting the star is seen in the upper left corner, here the three magi are traveling during the day, whether beginning their day with the rising of the sun, or drawing toward shelter for the night with the setting sun.  And though Alexi likely had a more specific point of the journey in mind, the painting can actually be interpreted to read that the magi are traveling toward Bethlehem, toward the infant King, or, that they have been touched by him and are now traveling back to their home.  It depends upon where you envision yourself standing and seeing them.

By contrast here too, we cannot distinguish details about the magi, not about their clothing, or their gifts, or the look in their eyes.  And through that, I see that Alexi has invited us into the picture, into the journey itself.  We can become the travelers, in whichever direction we envision ourselves going.

These two, very different paintings, both invite us into the story of the visit of the magi.  Where do you see yourself in them?