As I was working on my doctoral program years ago, one of the components that I included was a workshop involving creating mosaics.  Since I was funding the workshop, I said that the works we created would be given to the church.  I contacted a mosaic artist, and paid her to facilitate the workshop.  It was a wonderful experience with her, and we emerged with ten projects that showcased crosses in a variety of unique ways.

Since we had planned a two-day workshop, during which the simpler projects went fairly quickly, and the more complex ones took all of the time that we had allotted, the artist offered to help people create smaller, drink coaster projects that they could take home.  It was a wonderful gesture on her part, and people were very pleased to both present their larger works to the church and to have something to bring home to show family and friends.

A while later, after the conclusion of my doctoral program, I offered a second workshop, which included a modest enrollment fee, and which allowed people to plan and create any project of their own choosing.  That workshop was as popular as the first one, and resulted in some wonderful creations.  In that case I led the workshop myself, since the projects we were working on were similar in scale and difficulty to the ones from the previous workshop.  Had it been a workshop involving more ambitious projects, I would have invited the artist to return and to oversee that one as well.

This year, as I continue to imagine the possibilities of a Lenten series focused on the idea of mosaics, I am again going to offer a mosaic workshop to the people of the church.  There will again be a modest fee to cover the costs of materials, but it will be at a level that will make the experience accessible to anyone.  My hope is that, through the creation of mosaic works, people will further experience the overall theme, and consider the ways in which they create the mosaic of their lives, just as they will create the project that they choose in the workshop.

I continue to search websites for a variety of materials, especially those that will make the experience most accessible to people of varying skill levels in creating works of art.  But, of course, the emphasis is not on the final creations, but upon the process and what that may tell us about the Lenten journey and our own growth.

As I was reading a pamphlet from some religious organization last summer, I came across the thought that our lives are sort of like being in the process of the creation of a mosaic.  This caught my attention because mosaic creations are among my favorites.  This has been true from an early age, and still is something that fascinates me today.

As I thought about these two things, literal mosaics and the metaphor connecting them to our lives, it occurred to me that this might serve as a Lenten series that could connect with people on several different levels.  As we prepare for this annual season of making our walk toward Easter, I am working to plan this series.

Although it doesn’t need to be the starting point, I do always search for scripture passages and stories that might connect with a theme, both to enhance the exploration and to give people another entrance into their encounter with the biblical texts.  In this case, one of the first stories to come to mind is that of Joseph and the multi-colored coat that Jacob gave to him.  Various translations refer to this coat in several ways, but the “coat of many colors” is in the popular thinking and will most easily connect with people, as indeed the many colors will connect with the colors of mosaic creations.  A decision is then needed to determine whether this part of the Joseph story will be used in isolation, or if his total journey, as told in the latter chapters of Genesis, might somehow shed light on our own Lenten journey.

There are certainly other options of scripture passages to include in such a series.  Among these are Paul’s words in First Corinthians about spiritual gifts and the diversity and unity of the body.  This could easily weave together with the idea of each of us being a mosaic, and evolve into the church we together comprise being a mosaic as well.

I am also considering the possibility of presenting a mosaic workshop for members of the church, and I will write more about that next week.  The possibilities for engagement and for growth are many, and I am excited to explore this theme.

Jesus in Our Everyday Lives

One resource I enjoy receiving daily is an email from www.Christian.Art.  I have shared about this before, but was captivated by the one that I received on February 5th.  This one highlighted a painting depicting the large, unexpected catch of fish that comes after Jesus steps into Simon’s boat since the large crowd has been pressing in upon him.  The story from Luke 5:1-11, as painted by Jacopo Bassano, depicts the kneeling Simon Peter, along with presumably his brother Andrew, in one boat, with James and John and their father Zebedee in the other boat. 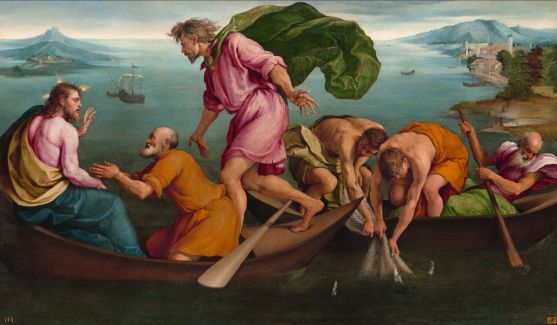 The Miraculous Draught of Fishes,
Painted by Jacopo Bassano (1510-1592),
Painted in 1545,
Oil on canvas
© National Gallery of Art, Washington

This has always been a favorite story of mine, especially since Simon initially says that they have fished all night and have caught nothing.  But, taking Jesus at his word, they throw in their nets, which they had been cleaning when Jesus showed up, and they haul in so many fish that their nets begin to break.

There are numerous elements to notice in this painting.  The vibrant colors of the foreground scene stand out against the muted tones of the sea and the surrounding land.  Of course, if one wishes to evaluate the painting from a technical sense, the boats containing Jesus and the fishermen are on much higher ground than the lake below, but the focus is not upon realism as much as it is upon the miraculous catch and Jesus’ call to discipleship.

Interestingly, the figure who is most prominently represented, at the center of the scene, is the one who isn’t mentioned in the text itself, that being Andrew.  He is leaning in to hear the conversation between Jesus and Simon Peter, with his cloak blowing in the wind.  Perhaps for the artist the unnamed Andrew represents the unnamed viewers, including us, who are invited into the story, and into a life of following Jesus.

Words and Images to Inspire

One resource for the arts within the context of life in churches is the Brehm Center at Fuller Theological Seminary.  As they define their work, they say that “Fuller’s Brehm Center works to integrate worship, theology, and the arts for the renewal of church and culture.  The Brehm Center is made up of four collaborative initiatives: Brehm Film, Brehm Music, Brehm Preaching, and Brehm Visual Art.”

I recently came across an online article, “The Arts, for the Life of the Church,” which contains a series of videos that highlight and celebrate the work of the Center, especially including sharings and insights from participants in the Brehm Residency program.  These expressions of the arts include theatre, visual arts, music and worship.

Here is the link for this article:  https://fullerstudio.fuller.edu/feature/the-arts-for-the-life-of-the-church/ .  I encourage you to check it out, to be inspired and perhaps to garner ideas as well for your own setting.

Through the years I have included the arts in our worship and educational settings, and have found that they have enriched people’s experience in diverse and wonderful ways.  The arts often become a starting point for discussion that leads people in new directions, encourages them to see scripture passages and theology from different perspectives.

We have also celebrated an Artist-in-Residence program, focusing on theatre, and that work is on-going with our Scripture as Theatre workshop, which is presenting “Hesed: The Story of Ruth,” this coming Sunday.  In addition, we have hosted art exhibitions, are preparing to resume our concert series very soon, and have explored diverse types of literature through our book club.

The arts enhance the life of a church, connecting with people’s faith and spirituality in often profound ways.  I hope the resources of the Brehm Center are helpful to you in your work.