As I detailed our church’s plans for Advent in a post at the end of November, I was excited about the season because of the variety of ways in which we were going to use the arts in telling the story of Advent and Christmas.  As I have written in the intervening weeks, there were unique elements about each Sunday and the arts that filled our times of worship.

The final Sunday of Advent was equally wonderful, as one of our college-age members shared her talents as a visual artist in creating another amazing painting during our worship time.  I invited people to take the opportunity during the singing of carols to wander back to see her at work, and to notice the progress in the creation.  One of our members, who sits in the back of the sanctuary, shared with me that she had a great view of the painting throughout the worship time.

Here is a view of the artist at work: 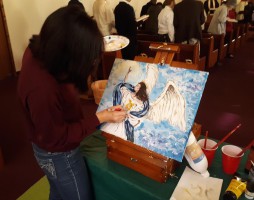 And here is the finished painting: 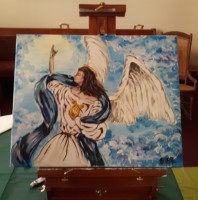 As we have done on the other two occasions when this artist has blessed us with such creations, we invited her to present the painting to the congregation at the end of the worship time, and to share her thoughts about the painting and her creative process.  She was as eloquent in her sharing as she was amazing in her painting.

It was a wonderful artistic conclusion to the Advent season.

Although I don’t go to experience productions of plays very often, I do thoroughly enjoy the theatre experience when I do go.  There is something so differently powerful about those live performances, distinctive from the power of film and television.  All three mediums are of course professional productions, but there is something about seeing, hearing and participating in something that is active and engaging in the way that theatre is.

I have been reflecting on this because our church’s Scripture as Theatre workshop group presented a dramatic reading of the Christmas story this last Sunday in worship.  This was not just a reading of the scripture stories themselves, although those stories were offered up prior to the presentation.  Rather, these were reflections by the workshop group members on how the story might have been experienced through the eyes of people who were witnesses to the events that transpired.  The characters included a couple of the magi, the innkeeper and his wife, a servant in the household of Herod, a shepherd, and the donkey that Mary rode on from Nazareth to Bethlehem.  The reflections of these characters were insightful, sometimes humorous, and distinctly original.  The reading was accompanied by original music composed by our Artist-in-Residence, with guitar, drum and trumpet adding to the experience.

It is interesting to be a participant in this workshop, for I see and learn so much about the process of creating an experience such as this.  The hours of discussion, creative writing and sharing, along with the editing for length of the script by our Artist-in-Residence, come together in a ten to fifteen-minute production.  It makes me more aware of how much must go into the large-scale theatre performances that I enjoy from time to time.

It was also interesting and informative to participate in the rehearsals that we held for this presentation.  There were actually parts of the script that I would have re-written if it had been up to me.  But that was not my role here.  I was a reader, actor (although I use that term with hesitation), and I was there to rehearse my portions and to support the other participants as they did the same.  There were also a few things that I would have done differently if I was directing the presentation.  But again, that was not my role.

In the end, as I thought about all of these things, I realized that I needed to trust the process of creating this production, I needed to trust the skills and perspective of our Artist-in-Residence.  And, in trusting that process, the church received the gift of a unique presentation of the story, which was very well received.

Although I am always partial to our church’s choral cantata, and so proud of our small choir, it seems that every Advent season I am blessed to experience a larger choir in a larger church.  This year that meant attending a concert by the Angel City Chorale in a large Presbyterian church.

One of our members is in the Chorale, and so people were anxious to hear the Chorale in person, and to support our friend.  Unfortunately, he ended up being sick on the evening of the concert.  Despite that disappointment, twelve of our members still went to experience the joy of the event.

The change in circumstances produced some interesting reflections for me.  When our friend was going to be singing, I wanted to be in the best possible seat so as to be able to see him.  Then, as things developed, the seating no longer mattered to me.  In fact, as things happened, I ended up sitting in the balcony, where I could see our group down below, but could not see the stage (it was a side portion of the balcony, somewhat oddly designed).  I thought that was fine though, for it was music, not drama.  However, as the concert began, I realized that seeing the performance did still matter to some degree, for the choir of singers, as well as the soloists and the orchestra, do indeed provide visual effects in all that they do.

But wherever one sat, it was an inspiring evening.  I found the music to be moving, and the setting of a gothic-style church provided a great deal of visual effect as well.  And, while our small church would not be able to produce such a large event, we still had twelve people who enjoyed it very much.

And that is part of the beauty of being a small church; we can fairly easily organize adventures to other settings, in this case the concert.  The size of our church doesn’t limit what we can do.  We just have to be willing to step beyond the confines of our own walls to experience the wonder of the church and the world that awaits in so many diverse ways.  I was so glad that folks were willing to support our friend in the Chorale, and equally happy that they were anxious to attend the concert even after finding out that he would not be singing.

A week later our small choir treated us all to an especially marvelous cantata, and all of these same folks were thrilled to experience the joy of Advent and Christmas in our own setting.

As my congregation began the Advent season, it was a joy to see everyone join together in decorating the sanctuary.  Two of us did the ladder work a couple of days beforehand, hanging the lighted garland and two large angels.  Everything else was left for folks to share in during our worship time.

There have been some Advent seasons when we have held a Hanging of the Greens event the day before the first Sunday, and other seasons when we have done as we did this year.  But I don’t believe I have ever been so moved to watch it all take place.  The movement around the sanctuary, and the creativity of people’s decorating choices, were wonderful to see.

What was particularly poignant for me was to watch a number of people, whom I was not certain would even choose to participate, who actually got quite involved, and brought new creativity and unique ideas to the whole picture.

It was also gratifying to see the joy and pride on people’s faces as they completed the decorating.  There was a clear sense of ownership for everyone who involved themselves in the process.  It certainly leaves me inclined to again include this activity in the first Sunday worship celebration next year, rather than only involving those who choose to come to a special decorating event.

Decorating the sanctuary is a visual way to bring the Advent season to life at the very beginning.  This is also the church season, perhaps more than any other, when the riches of visual art can be drawn upon in beautiful and profound ways.  There are so many great works from centuries past, as well as contemporary pieces, that can help people to visualize the events surrounding the birth of Jesus in ways that may open new doors of understanding and insight for them.  For example, as one views the manger scene in 17th century Italian buildings, and then in a 19th century American setting, one can be helped to imagine what that birth scene might look like today.  Artists have known that it is a powerful statement to bring long ago events into their own era and the lives of the people of their time.  We can do that too through the exploration of a wide variety of artistic depictions of the events surrounding the birth of Jesus.  The experience of viewing the art, and discussing it, can help to enliven the story for people in amazing ways.