Experiencing Stories in More than One Way

I have been slowly reading a book of poetry by Donald Levering entitled, Outcroppings from Navajoland.  I could have sat down and read this book in one sitting, but as I have said in other contexts, I believe it is important to read such collections slowly, so that the individual poems might weave their way into our consciousness and spirit.  The goal is not to finish a book, but to allow the poems to come to life within us.

Certainly, in any collection of poetry, some poems will strike us and others will quickly leave us, perhaps to touch us at another time.  As I have been making my way through this collection, I was struck by the following poem, entitled, “Kachina Doll Salesman.”

he limps.  The children of

popular with his Anglo buyers.

Before TV, these dolls

who shaped and painted our world.

only in the gifts the big

of belief too cheaply,

but the hours spent fixed

on root, knife, and paintbrush

he dwelled in myth.  To us

he hands a sun-god,

abstract disk of a face

who wields a tiny gourd rattle

that shook thunder in ages past.

The portion that particularly spoke to me is:

of belief too cheaply,

but the hours spent fixed

on root, knife, and paintbrush

he dwelled in myth.

The idea that the artist dwelt in the myth during the process of creating the dolls was especially poignant.  Even if he was selling them too cheaply, he had received the gift of being enveloped in the myth as he was engaged in his craft.

It got me to thinking about how we can live a story, biblical or otherwise, more deeply through the creation of an artwork about it.  As we study a story, and then create something with paint, or clay, or even with words, we engage that story more fully than we might otherwise be inclined to do.

The challenge in such an approach is that most people don’t consider themselves to be artistic, and thus they don’t want to attempt to engage a story in this way.  It is important to begin with a discussion about the goal of participating in such creativity.  It is not, in reality, to create a great work of art.  Rather, the purpose is to use the creative activity as a way to enter more fully into the story itself.  The goal is to gather a deeper understanding and appreciation of the story.  The work of art, in a sense, is the interior growth that happens through such an exercise.

If people are freed from having to be an accomplished artist, then they can use their imagination with no more expectation than having a richer experience of the story.  And, surprisingly, most people are apt to discover that they really do have more creative ability than they had imagined.  But the primary goal is the experience itself.

The Importance of Music

Like many smaller churches, we have gone through times when finances have been particularly challenging, even more so than in most “normal” years.  As we considered our budget in one such extra challenging year, one of the proposals put on the table was to eliminate the position of Choir Director, and thus, really, to eliminate the choir.  This came from a person, as you might imagine, who was neither in the choir nor in worship very often.  It was not a priority for her, nor in her opinion even a necessity for the worship life of the church.

My immediate response was to say, “No.  If it comes to making cuts, I will reduce my salary before we eliminate that position.”  This was not just a comment meant to somehow make me look good for being willing to make such a sacrifice.  No, I feel that the musical program of a church is critical to its vital ministry.  In fact, if a church, either because of budget constraints or due to declining numbers of choir members, feels the need to eliminate that part of its ministry, it is a sign that the church is in decline and perhaps in serious trouble.

This doesn’t mean that a church must have a choir.  A praise band, or a group of worship leaders, can serve the church in a similar way, sometimes even expanding the role of such leadership in worship.  But if a choir does need to disband for some reason, then find a way to have the remaining two or three or four people be a part yet of the musical leadership of worship.  Be creative.  Use the gifts of these people to help lead congregational singing, or find other ways to help them serve.

If there is no one to lead the singing, or to come together as a choir, then a pianist can have a tremendous impact on the worship experiences of the church.  We have a great pianist, who not only accompanies the choir and the congregational singing, but also brings in everything from Pink Floyd, to Simon and Garfunkel, to Holst’s “The Planets,” to his own improvisations.  He definitely enlivens our worship gatherings.  I encourage his creativity.  I may not personally like every piece he plays, but I value the diversity of musical expression that he brings to our church.

Music is a critical part of worship experiences.  It touches our spirits in ways that only music can.  And songs and hymns also bring a message with them.  In fact, even if people in the congregation feel that they really can’t sing, they can read the lyrics and gather inspiration from them.  So, if someone suggests cutting back on the music program in your church, do everything you can to keep that vital part of church life both alive and active.

On Sunday mornings I teach an adult class for which I am loosely following a book by Brian McLaren entitled, We Make the Road by Walking.  It is subtitled, “A Year-Long Quest for Spiritual Formation, Reorientation, and Activation.”  Brian somewhat follows the liturgical year, but Part One of the four parts is more general in nature.  The book is designed, however, so that one can really jump in at any point, and as I began this class in January, I started with chapter 18.  For each week he provides two or three scripture passages, upon which he reflects and then challenges the reader to engage in further reflection and action.  I appreciate his approach, and I use it as a starting point for our class discussions.

As we gathered this last Sunday, we were presented with the passage from Matthew 25:31-40, wherein Jesus is talking about the final judgement, and how he will separate the people as a shepherd separates the sheep and the goats.  Using McLaren’s exposition as a beginning point, we talked about how Jesus turned the expected order of things upside down, how God was not just interested in religious piety, but also in how people treat one another, how they care for one another.

Then I brought out a picture of a mosaic which presented this story to the viewer.  We looked at the sheep, with the right hand of Jesus directed toward them, and we looked at the rather neglected goats on the other side of the mosaic.  It made clear the details of the telling of the story, but it also raised the question of, “What’s wrong with goats?”  And, of course, that was an image Jesus used to make his point, but he wasn’t really making a judgment about goats.  In fact, I told people, in the final judgment with Jesus, some who would be classified as goats now would be welcomed in, and some who are sheep now could well miss the boat.  But using the mosaic helped us to bring concreteness to a story that we might otherwise gloss over.  The mosaic enhanced our conversation.

But then, having sort of anticipated the question about the goats, I presented them with a photograph of a goat nuzzling close to a sheep, with both the goat and the sheep being seemingly quite blissful in the moment.  It responded not only to the question about goats, but it also presented a vision much like the one the prophet Isaiah shares in chapter 11 about the beauty and peace in God’s reign.

Any time we can bring art into such educational settings, where we can really spend time with both the readings and the art, it enriches the discussion and leads us into new insights.

The Prodigal Son and His Brother

When I was doing my doctoral work, I was introduced to an amazing bronze sculpture by artist Margaret Adams Parker.  She actually came and talked with our seminar about another project of hers, but also spoke about this sculpture, and I was intrigued by her work.  So it was, that a number of years later, when I had occasion to visit the Duke Divinity School, I was anxious to see this installed sculpture in person.  I was not disappointed.

The Episcopal Church and Visual Arts website provides a wonderful description by the artist about the process of creating and installing the sculpture.  The link is http://www.ecva.org/wordimage/articles/parker_reconciliation/reconciliation_1.htm  It is a fascinating look at the work of this artist.

When I visited Duke, I took many photographs of the sculpture, but one can also find beautiful photographs by doing s simple search about the sculpture.  To be honest, I am not sure if this photo was one of mine or one that I borrowed from the internet.  In any case, it is a view of this wonderful sculpture entitled, “Reconciliation.” 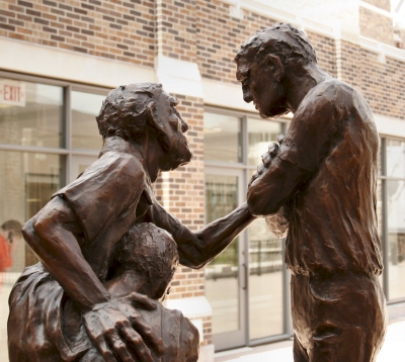 Every time I prepare to speak about this parable, be it in a Sunday message or a Bible study, I pull out several images of the sculpture to help add to the conversation about the story.  I use images of the whole sculpture, and close-ups so as to see clearly the emotions expressed in the faces and gestures of the three figures.

The artist comments, in the article mentioned above, about the process of choosing what to depict through the sculpture.  She writes: “It is a challenge to take any extended story – this is the longest of the biblical parables – and depict it in a single work of art.  Where a filmmaker or choreographer is able to present the complete narrative, a sculptor can “tell” only one part of the story.  For instance, we might have chosen to depict the prodigal’s initial demand for his patrimony, his “coming to himself” among the pigs, or his journey home. But the committee and I agreed that while all of these scenes are essential to the tale, the events at the end – scenes involving prodigal, father, and older brother – serve best to summarize the meaning of the whole.”

The view of the younger son clinging to his father, of the older son standing defiantly, and of the father’s hands in intimate contact with each of his cherished sons, all communicate powerfully the emotions of that moment.  The use of works of art such as this, not to illustrate the story but to more fully engage with it, go a long way toward enriching the worship or educational encounter with this parable.  It is indeed a powerful tool for encountering almost any biblical story.